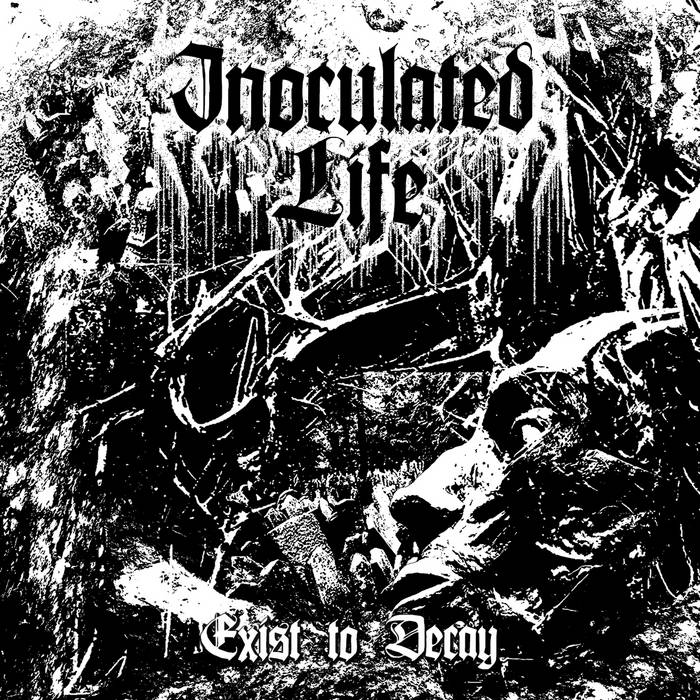 Fraz Grinding death metal. Great old school vibe with some excellent genre bending moments that highlight the band's ability to write interesting exhilarating music. it's not going to redefine the genre, it's going to sonically destroy it.

"Charging out of the gate with nasty HM2-fueled riffage, Inoculated Life soak in outside influences from grindcore and powerviolence for a blistering, feedback-ridden record. Everything on Exist to Decay hits like a ton of bricks, from the hefty guitars to the raw, filthy vocals."
- Decibel Magazine
www.decibelmagazine.com/2018/11/29/full-album-stream-inoculated-life-exist-to-decay/

"Rage and disgust fuel the music of Denver's Inoculated Life, and armed with an arsenal of HM2-powered death metal, grind, and powerviolence, they make for a formidable wrecking crew, as you'll discover through our premiere of the title track to their debut album"
- NO CLEAN SINGING
www.nocleansinging.com/2018/11/01/an-ncs-premiere-inoculated-life-exist-to-decay/?fbclid=IwAR1RIAv6VGOS70p5FplNQRoKe8W_ALWu-zAgOQfVZhYrW7e-JLseDB5mpmU

"A mix of crushing death metal heaviness and fast-paced grinding noise, this is the sound of horror personified. Across seven tracks Inoculated Life leave a smoking wasteland along their march to destruction."
- Games, Brrraaaiiins, and a Head-Banging Life
www.gbhbl.com/album-review-inoculated-life-exist-to-decay-redefining-darkness-records/

"It's dark, gloomy and full of anger that seethes it's way out of the speakers at you. If there is a waiting room in hell then I am certain this song probably gets played in it frequently. It's definitely a song I would recommend to anyone who is fond of this genre."
- Metal Temple
www.metal-temple.com/site/catalogues/entry/reviews/cd_3/i_2/inoculated-life-exist.htm

"On Exist To Decay, Inoculated Life offer up seven tracks of killer death metal, crust, grindcore, and powerviolence. Overall, Exist To Decay makes for an amazing listen and definitely should not be missed. Highly recommended! Enjoy!"
- Dead Air at the Pulpit
www.deadpulpit.com/2018/12/us-inoculated-life-exist-to-decay-lp.html

"..the production sounds ruthless, it's like eating raw meat in its own "blood" sauce.."
- From Beyond Metal Fanzine
beyondmetal.blogspot.com/2018/11/review-inoculated-life-exist-to-decay.html

“A mix of crushing death metal heaviness and fast-paced grinding noise, this is the sound of horror personified. Across seven tracks Inoculated Life leave a smoking wasteland along their march to destruction.”
- Games, Brrraaains, & a Headbanging Life
gbhbl.com/album-review-inoculated-life-exist-to-decay-redefining-darkness-records/

"Grinding, messy sounding death metal. Should appeal to the crowd that thinks Autopsy and Master are the sine qua non of the classic scene"
- Third Eye Cinema
thirdeyecinema.wordpress.com/2018/11/20/on-yoolis-night-yuletide-solstice-greetings/

Hailing from Denver, Colorado, the trio that call themselves INOCULATED LIFE have been around for just over a year now with a self-released demo under their belt entitled, In Hope of Eternal Life. The band quickly sold out of their cassette demo, but word continued to spread about this powerhouse from the West. The band's music is a mix of Death Metal, Grind, and Powerviolence that, upon first listen, is in-your-face and undeniable. Their self-proclaimed battle cry has been "Fuck the police - Fuck the judicial system - Fuck the industrial meat and dairy industry," and they continue with that theme on their newest offering, Exist to Decay. It's hard to imagine the wall of sound eminating from the speakers is coming from just 3 musicians...the pure unadulterated rage this triad spews is very REAL.

While some may be quick to judge from the obvious HM2 influence, the more you listen, the more you realize that these gentleman are on to something here. INOCULATED LIFE are bringing groove into Death Metal - just enough at just the right moments - and I LOVE it!! You can dismiss any "core" reference immediately as these grooves are meant to crumble cities - you will find nothing but violence, hate, pity, and fear within. I hope you are ready....

Bandcamp Daily  your guide to the world of Bandcamp

Benji B talks about his new compilation ‘Deviation Classics’